March's author of the month is R. J. Palacio! 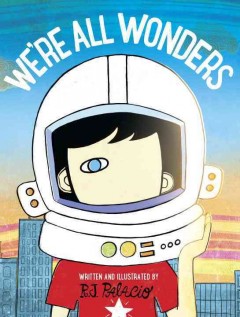 A former art director and book jacket designer, R. J. Palacio didn't come upon the inspiration to write her bestselling children's book, Wonder, until she was well established in her career as an artist. After witnessing her son's impolite reaction to a young girl with facial deformities, Palacio could not stop thinking about how she might have taught him to react more sympathetically in the moment, and not long after, the story of 10-year-old Auggie Pullman was born.

Born with a genetic disorder that caused several facial deformities, Auggie states on the very first page - "I won't describe what I look like. Whatever you're thinking, it's probably worse." Having been homeschooled his entire life, Auggie is about to give school a try, but he is well aware of the stares that he receives when he is in public. Who knows how the kids at Beecher Prep will react when they first see his face? Will they ever see beyond his appearance to the perfectly normal kid inside?

Since Wonder debuted in 2011, Palacio's message to Choose Kind has sparked a nationwide movement among parents and educators to encourage children to look beyond outward appearances, and to always be kind to others. Palacio's latest release - a picture book - brings the message that We're All Wonders to a younger audience. Readers can also enjoy a look at Palacio's artistic talents, as she also created much of the illustrations for the book.

Interested in more of R. J. Palacio's work? Check out our top picks from ELPL's catalog below!