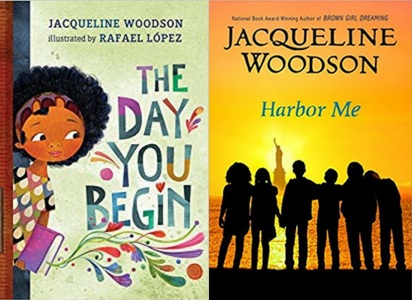 This month's featured author, Jacqueline Woodson, is the current National Ambassador for Young People's Literature and has won numerous awards throughout her career, including the National Book Award, the Coretta Scott King Award, and multiple Newbery Honor Awards. At the end of August, Woodson will release two new children's books -- including the first middle grade release since 2014's Brown Girl Dreaming.

Woodson's new titles -- The Day You Begin, a picture book illustrated by Pura Belpré Illustrator Award winner Rafael López , and Harbor Me, a middle grade novel -- broach tough topics for children including immigration, mass incarceration and racial profiling brilliantly through Woodson's effortless prose, teaching lessons of understanding and empathy that will encourage readers to celebrate their differences, share their stories, and be proud of who they are.

The Day You Begin