In August alone, Reynolds will be publishing two new books for kids and teens. The first, Miles Morales: Spider-Man offers up a new spin on the traditional Marvel hero. His second, Patina, is a follow-up to the National Book Award Finalist, Ghost, about a talented young runner who is recruited to a championship track team, and attempts to move on from his traumatic past. Patina, his next installment in the series, follows a girl on the same elite team who is attempting to outrun demons of her own. 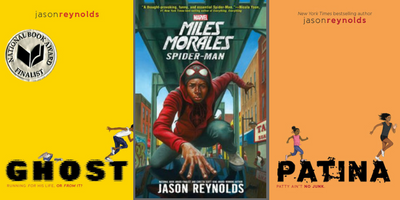 Reynolds has long focused on capturing the attention of reluctant readers, particularly boys, with his realistic, relatable characters who face oftentimes unfathomable challenges in their lives, and triumph. As a young person, Reynolds admits that he was often deprived of books. There were no characters like him on the page, no one who understood what it was like to be where he was in life. Through stories like Ghost and Miles Morales, Reynolds is breaking down barriers, reaching new audiences, and proving to youth everywhere that no matter their background or the lifestyle they lead, they should never question whether to put their story out into the world for someone else to find.