It is déjà vu all over again. Back in 2011 and 2012, libraries were trying to negotiate with publishers to be able to purchase ebooks and digital materials more seemlessly. Publishers like Hachette were not willing to sell new digital content to public libraries; they only would sell backlogged or old titles. When they did agree to sell digital books to libraries, they charged triple the amount per item and only allowed 25 circulations per item before libraries had to purchase a new title.  Well, fast forward to 2019 and Macmillan Publishers are once again targeting libraries and their ability to purchase e-content., opens a new window Macmillan’s new library business model, effective on November 1, allows a library to purchase a single copy of a new title in eBook format when released, then Macmillan will impose an eight-week embargo on additional copies of that title sold to libraries. According to the Public Library Association (PLA), “the new Macmillan eBook lending model expands upon an existing policy that took effect in July 2018, when the company, without warning, issued a four-month embargo applying solely to titles from its Tor imprint.”

Macmillan’s new policy is a slap in the face to libraries everywhere, which purchase millions of books and ebooks every year. Libraries share and promote authors and titles with their patrons every single day. Many of those authors and titles are published by Macmillan.  Macmillan’s practices make it hard for libraries to provide access to information and to fully serve their communities. Libraries simply want to be able to purchase digital material without constraints so that information is accessible. 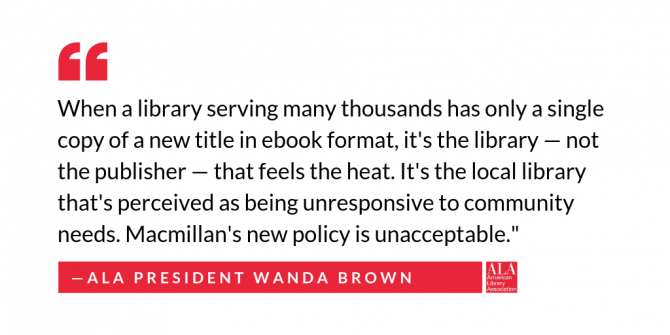