Congratulations to Annie Lloyd, the Second Place winner of the Community Writing Center Fiction Contest in the Youth category!

Annie is a fourth grader who likes camping, hiking, working in the vegetable garden, and anything that has to do with being outside. She has visited five national parks. You will also find her on the soccer field or playing with her black lab, Maisie. Someday, she hopes to become a dog groomer and to run an animal rescue with her two sisters. 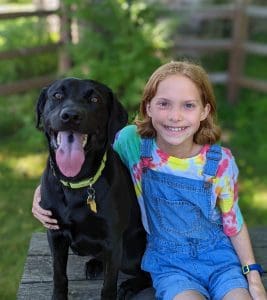 A duck flew overhead, oo-eek, oo-eek, oo-eek. It was the mating call of the female wood duck. Jweep-Jweep-Jweep, a call answered in the distance. She had a white throat, leading to a gray brown breast, which faded into a white belly. Her body was grayish brown, with a light ring around her eye. She was a wood duck. Then they saw each other. The male that responded to her call was very colorful. He had a green head, sharp red eyes, his bill was red and the sides of his face were black, with a white stripe running along his neck and under his chin. They looked at eachother then They dipped down to a pond, where they swam for a bit,  the ice water nipping at their feet but the down under their flight feathers kept them warm. Swan noticed a glare of light at the far end of the pond.  Jay swam around chasing the other male ducks away so Sawn will stay interested in him. The next day they flew north. Winter was over and spring, along with the eggs, were on there way. The early February morning sun glared down as they flew to a willow. Landing on a broken branch, Swan waddled into an old woodpecker hole, Jay waited outside. Now Jay saw the glare. Swan came back out, she approved. A week later she flew the willow and  squeezed her plump body into a hole barely bigenoff for her. She laid 5 eggs over 5 days but she didn't incubate. She waited for the eggs. Jay sat outside. 9 days later she had laid 8 eggs.Then the incubation began! Jay left, he was no longer needed. 5 weeks later Swan was a mother to 11 healthy ducklings! when BANG! All the ducklings jumped, but Swan stayed perfectly still. This wasn't the first time the humans had come hunting.

The day after they hatched, intrigued by Swans call, Poppy, Zues, Eyeris, Popo, Brutes, Venus, Coco, Maylin, Dilin, Opera and Leanardo hopped out the hole in the willow and one by one they fell 30 feet before plummeting into the water!  They  instinctively knew how to swim and find food, but that didn't stop them following Swan! Swan was always on the lookout for predators such as: foxes,and hawks, and at night: owls and racoons.   After they were done swimming, Swan flew back to the nest but how do they get back up? They climb! Zeus was the last one to start climbing. He was half way up when he noticed the glare. They continued this way for a few weeks then they learned to fly and by two months they flew away.

Swan stayed the night in the nest. In the morning hunters were coming closer “this tree looks good '' said one. They pulled out saws. Swan was still sleeping then she found herself tipping. Down, Down, Down she fell, then just in time she flew out of the hole and flapped past the marsh into the forest, leaving her falling, broken home behind her. Swan was flying around when THWIP Swan's wing hurt, then without warning everything went blak.

Brigitte was a girl who lived near the swamp and she took in injured ducks, foxes, falcons, geese and all sorts of other animals that needed help. She had special permission to keep the animals that couldn't, for whatever reason, return to the wild. Xhu was a one legged baby wood duck that had feeble bones and almost didn't make the 58 foot jump from her nest. But she ended up happily living with Brigitte in the small log cabin that she now called home. Xhu enjoyed living with Brigitte but found the lack of flying and eating arthropods and insects a little disappointing. In the early May morning Brigitte and Xhu went out to the barn to feed the animals. Spy,  a paranoid, blind great horned owl, could hear them coming. He gave a frightened/intrigued/ “do you dare come near me?!” hoot and started going wild. Mr. Fluffsbirkly, a deaf cottontail rabbit, cocked his head, then recognizing Spys alert posture, darted behind a hay bale where he found Skippy, a white rabbit that Brigitte rescued from the Draize test after being blinded. Skippy crouched low and started to shake. Matilda, an illegally bred fox who acted more like a dog, ran to the door and started scratching. Feely, a painted turtle whose shell didn't develop right, saw matilda scratching and trundled over to the food bowl and looked in to see if there was any food yet. Brigitte opened the door and immediately everything ceased. she was just finishing up feeding all the animals when, BANG! Brigitte dropped  everything she was holding “Oh no! He’s at it again!”

Swan was very cold. She opened her eyes, and saw that she was in a log cabin. She saw that all of her feathers had been pluked, and heard whistling behind her. She turned her head, It was Patrick Hollow. He was sharpening his knife and whistling. Swan looked at the walls and saw: knives, axes, bare traps, bow and arrow, guns  and just about everything you'd need for hunting every sort of animal  that existed. There was a sudden ringing and Patrick answered the phone “Hello?” he said. “Oh! Slug it’s you! How y’a doing?” there was silence then

“Yep, got her feathers all off and ready to go” silence, Slug was talking “Oh don't worry bout that I've been watching her since spring, she’s nice and healthy, the rich folk'll love it!” quiet, slug was talking some more. “Don’t be supid” Patrick said, a mad gleam in his eyes “I’m givin her to the coyotes, then I’ll say that I found her in the woods. The government will never know I darted her. They will be glad for a snack” then with a grin he said “I've been starving them, so that i have a good reason to keep them. Anyway see you tomorrow.” He hung up.  Then an unearthly shriek came from outside. “PATRICK HOLLOW! GET OUTSIDE RIGHT NOW!” “Ug, she's back again” moaned Patrik.

“GET OUT HERE OR I SWEAR!” Came the unmistakable shreak of Brigitte France. Patrick walked to the door and opened it. “Hello” he said in a pleasant voice as though he couldn't hear the 15 year old girl screaming bloody murder at him. “Would you like to come-” he began but Brigitte kicked him in the shin and marched into the cabin. “Well!?!” she said, her eyes searching the cabin “where is it?” Then her eyes landed on Swan. “You didn't” she said in a deadly whisper. “What's that?” said Patrick, stumbling into the caben clutching his shin. “WHAT DID YOU DO!?!” she screamed so loudly that one of the brandy bottles he used to drug the animals shattered into a thousand little pieces. Her frizzy blond hair fell across her face as she marched across the cabin and poked Patrick  hard in the chest “What did you do?” she repeated. “Don’t be crazy, it’s not like it’s human, it can't feel anything.” He said.  Brigitte had had enough; she bawled her fist and with all her strength, she punched him in the nose. He stumbled backwards clutching his face.

While Patrick was occupied, Brigitte ran to Swan and picked her up. “Oh you poor thing!” Brigitte tucked Swan's head under her arm, but made sure that Swan could still see so she wouldn't freak out. Then she marched out of the cabin to the back yard. When Brigitte was in the backyard she stalked to the coyote's  pen and opened the door. They shot  out of the pen and disappeared into the forest. “Now then,” she said “Let's get you to my house”

Five minutes later Swan was in a warm tub being scrubbed by Brigitte and being closely watched by Xhu. After a bit of scrubbing Brigitte transferred Swan to a room temperature tub and rinsed all of the soap off her skin. After the bath Brigitte checked Swan for injuries. Finding none, Brigitte put Swan into a separate barn for the night.

The next morning Brigitte took Swan to the animal hospital where they said that Swan would need about a year to regrow her feathers. June, July, August and September all came and Swan’s feathers were coming in nicely. October, November, December and January all came to. February, March, and then finally April.  To Brigitte, Swan looked ready to go. “I'm gonna miss you.”  She said one morning as she carried Swan to the field. “Now you are a good duck, and stay out of the way of hunters and eat lots of healthy food.” Brigitte stopped, then with a deep breath she hugged Swan. “Goodbye,'' she whispered and Swan was free.