Congratulations to Zachary Kleinerman, the First Place winner of the Community Writing Center Fiction Contest in the Teen category!

Zachary Kleinerman is a former East Lansing High School student, and a long time EL resident. He will be attending Baylor University in the fall, with a major in Psychology and a minor in either photography or creative writing. He attributes his writing creativity and knowledge to his third grade teacher Mrs. Bean, who greatly influenced him in this field. The story “The New Drug” was heavily influenced by the Covid-19 pandemic and the immense effect on mental health in young teens. 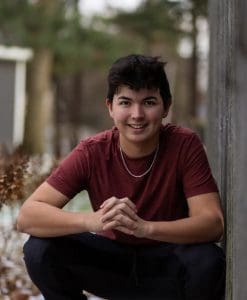 It's the year 2222, the world has become a floating ball of abyss. The citizens of earth have become completely encapsulated by technology. Social interactions are scarce, and imagination and adventure are long in the past. The rate of suicide has increased exponentially as years go by, and the people who are not suicidal spend their days hopeless and depressed. Friendships, relationships and meaningful connections are a distant memory, and as a result the population dwindles as no children are born. Scientists predict the world to go extinct by 2300.

It's a Sunday morning in the small town of Franklin, Tennessee. The rays of the sun radiate through the storefront windows, and the birds sing their morning lullaby. The city in the 2000’s was full of life and prosperity, there were annual carnivals and fairs, and the people of the small town were part of an overall community. This however is a distant afterthought in the year 2222. The only sign of life are the wild kittens roaming the roads, and the racoons ravaging through garbage bins. The town stores have closed, as have the restaurants. The few remaining in this town spend their days in a trance with technology, unable to escape the endless and meaningless likes of entertainment. The gradual takeover of technology started in the 2000’s with the invention of the iphone and later thousands of other products in the beginning designed to be merely a tool. But as technology advanced, developers kept on finding ways to immerse the user more and more in the experience. It became a worldwide epidemic in the early 2100’s as people stopped conversing with each other completely, and became isolated from the real world; completely and utterly inside the world of technology. This isolation led to serious mental health issues for a record number of people, and the world quickly became a dull society of screen-addicted people.

Across the street from the abandoned tavern, a ten year old boy and his family live in a two bedroom house. The walls are bleak, and the rooms are dim. The smell of sewage fills the air, and the only source of light comes from a tiny window above the front door. The boy's parents spend their days encapsulated by their devices, and the boy is left to fend for himself and his little sister. At the age of seven, the boy had discovered a stash of books in the basement of an abandoned library, they dated back to the 2000’s and he started to discover the joys of this era. The books were in remarkable condition because they were in a heavily enclosed environment.  In these books, he discovered the notion of friendship. He had never experienced or heard of a “friendship” before but the idea of it was fascinating to him. He also discovered what family meant at that time, it had meant unconditional love, care, and compassion. The boy read hundreds of books, from the Adventures of Huckleberry Finn, to the Harry Potter series. As fellow kids spend their hours immersed in technology, the boy discovers the wonders of this era.

The boy attempts to spread his knowledge to his sister, who is also addicted to technology. She disregards his findings, and continues with her way of life. The boy continues to read various novels; he discovers the idea of adventure and connection with the book The Lord of The Flies, and the meaning of acceptance and principle from the book To Kill a Mockingbird. On the other hand, he reads books like Captain Underpants and Diary of a Wimpy Kid, which brings an unknown sense of joy and laughter to the boy. As he becomes more and more immersed in this past world, he starts to understand the effects of technology. He comes to understand it caused an overall disconnect in society; turning the once joyous and prosperous world into this dull wasteland of a world.

It's a summer night, of 2300; the leaves flutter in the air and the crows fly across the sky. The breeze is soft and cool, and the sounds of wolves and hyenas echo in the distance. An old man steps outside of a small house in the city center of Franklin, Tennessee…his bones weak, and his skin frale; he lays down in the center of the town road and watches the starry sky. The world is still, and silent.