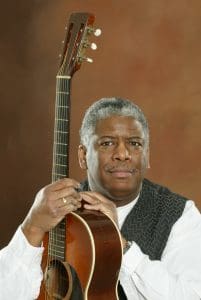 Rev. Robert Jones, Sr. is a native Detroiter and an inspirational storyteller and musician celebrating the history, humor and power of American Roots music. His deep love for traditional African American and American traditional music is shared in live performances that interweave timeless stories with original and traditional songs.

For more than thirty years Robert has entertained and educated audiences of all ages in schools, colleges, libraries, union halls, prisons, churches and civil rights organizations. At the heart of his message is the belief that our cultural diversity tells a story that we should celebrate, not just tolerate.

Rev. Jones makes his home in Detroit while performing throughout the United States, Canada and Europe. An award-winning multi-instrumentalist, he is accomplished at guitar, harmonica, mandolin, banjo and fiddle. He has recorded six albums of original and tradition songs. Robert is the former host of the award-winning radio programs “Blues from the Lowlands” and “Deep River” broadcast on Detroit Public Radio’s WDET-FM Detroit. And he has taught at music history courses at Wayne State University in Detroit.  As an ordained minister and a Baptist pastor, he has an unwavering faith in the cultural importance of sacred and traditional American roots music.

Robert recently performed at the East Lansing Public Library with Reggie Harris and Josh White, Jr.  Their performance was titled “In the Shelter of Each Other”, and you can watch it here:  https://www.elpl.org/blogs/post/in-the-shelter-of-each-other/

For more information about Robert, please visit his website, https://www.revrobertjones.com/

"The concert was funded by a grant that was provided by Michigan Humanities and the National Endowment for the Humanities (NEH) as part of the Coronavirus Aid, Relief and Economic Security (CARES) Act economic stabilization plan."