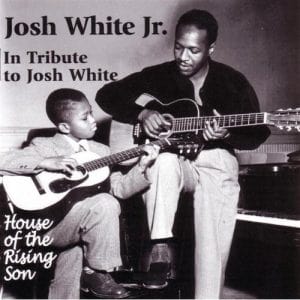 Josh is enjoying a long and varied career.  From the college tour circuit, to the broadway stage, to performing for the Pope when he visited Michigan.  At the age of 9 he co-starred with his father in “How Long ‘til Summer?” and received a special Tony Award.   Josh Jr. chronicled his father’s life in the theatre production, “Josh-The Man and His Music”, which premiered at the Boarshead Theatre in Lansing in April of 1983.

Josh received a Grammy nomination in 1987 for a CD he recorded with Robin Batteau,  Jazz, Ballads and Blues.  Josh has recorded almost 20 CD’s, including a children’s CD with Ron Coden, All the Children.  Some of Josh's CD's are available to check out at ELPL.

Josh Jr. is known for his interpretation of songs.  His concert selections range from Bob Dylan’s powerful “I Shall Be Released” to the quiet ballad of Michael Smith’s “My Grandmother’s House”.  He is also a songwriter of Think, Say A Prayer for a Stranger and many others.

Josh followed in his father’s footsteps in approaching social activism.  One of his favorite mottos to live by is “If not me, who?  If not now, when?”  Josh lends his time and talent to causes he is passionate about, and the library is lucky to be one of the recipients!

Josh recently performed at the East Lansing Public Library with Reggie Harris and Robert Jones.  Their performance was titled “In the Shelter of Each Other”, and you can watch it here:  https://www.elpl.org/blogs/post/in-the-shelter-of-each-other/

"The concert was funded by a grant that was provided by Michigan Humanities and the National Endowment for the Humanities (NEH) as part of the Coronavirus Aid, Relief and Economic Security (CARES) Act economic stabilization plan."