The East Lansing Public Library (ELPL) needs your Twitter vote! Here's how you can help!  During the week of February 21-28 go on Twitter and Tweet #DigEastLansing.  Each tweet is counted as one vote.  The hashtag who gets the most votes wins, it's as simple as that! You can vote as many times as you want but not via retweets.

ELPL is one of five libraries in the running to receive a digitization grant from the Clarke Historical Library at Central Michigan University.  The papers we want to digitize are the 1919-1926 volumes of East Lansing Community Life, the 1930-1934 copies of the East Lansing Press, and the 1963 Towne Courier.

ELPL wants to preserve these pieces of local history and provide greater access to this important historic knowledge.  The papers focused solely on the City of East Lansing.  They featured articles on local heroes, neighborhoods, area schools and sports.  Digitizing the collection will make them far more accessible to the community and beyond. 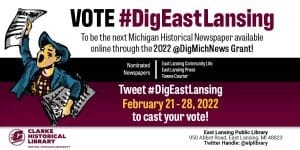 Vote #DigEastLansing and help your library!