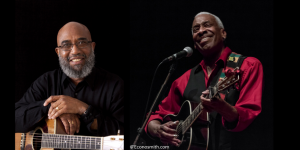 Josh White Jr. and Reggie Harris are two musicians known not only for their musical concerts but also for educating people about the Underground Railroad and other subjects that play a part in the history of race in our country.

Josh White Jr. is a partner in Living History, a program that goes into schools and teaches students through story and song by having them assume the roles of the people they are learning about.  He began singing with his father at the age of 4 and 2020 marks his 76 year performing.

Reggie Harris is a well-traveled performer, lecturer and cultural ambassador.  He has earned wide acclaim and respect from peers and audiences alike throughout the U.S., Canada, Europe and other locations around the world.  He combines spirituals and roots music with historic inspiration to create moving, original songs.

Listen to this episode, opens a new window